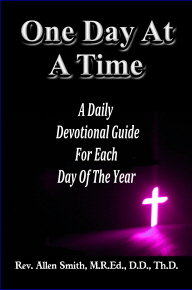 Hebrews 2:14 (KJV) Forasmuch then as the children are partakers of flesh and blood, he also himself likewise took part of the same; that through death he might destroy him that had the power of death, that is, the devil;

We are reminded that we are human, not angelic in nature. Jesus Himself left Heaven and took upon Himself this same nature, He became man. He went to the death of the cross to defeat Satan. Jesus atoned for all sin, and in doing such He removed the cause of spiritual death for all who will believe in what He did.

Rev. Allen Smith was born in the little town of Neoga, IL in 1951. He was saved at the early age of 12 years, and started preaching when he was just 15. He has been preaching and teaching now for 46 years. He has been a pastor for over 30 years of that time. Rev. Smith has been a featured speaker at camp-meetings and conventions down through the years. In addition, he spent 3 years as president of International Bible College and Seminary in DeSoto, Missouri, where he authored 9 different syllabi for the Seminary. Rev. Smith presently holds a Master’s Degree in Religious Education, a Doctor of Divinity Degree, and a Doctor of Theology Degree and has published several articles, in nationwide religious publications. From October of 1993 until July of 2010, Rev. Smith published a nation-wide Southern Gospel news magazine called SGN Scoops Digital. He is currently the founder and President of Lighthouse International Ministries which is a missionary outreach ministry. Rev. Smith’s first Kindle Edition book titled "Why?: Answering Questions About The Crucifixion" is currently available on Amazon.com. His newest Kindle Edition book, a daily devotional, titled "One Day At A Time" is also available on Amazon.com. Rev. Smith has not slowed down. He is currently writing his third Kindle Edition book, “The Sacrifice: The Only Way To God”.
View all posts by Rev. Allen Smith →
This entry was posted in Uncategorized and tagged Blood, Christian, Cross, Father, God, Jesus, Lord. Bookmark the permalink.